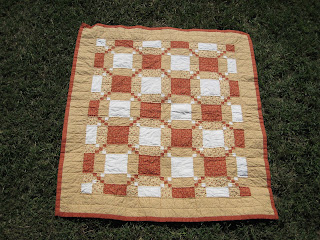 A quilt I made several years ago.

Wow! A line of thunderstorms moved through over night and there was a lot of thunder and lightning and strong winds. Fortunately, we didn’t have any damage.

Speaking of damage, JMM has the roofing company that we used after Hurricane Ike coming back to look at the roof near the corner of the front porch. They did such excellent work for us before. I just hope they don’t tell us we need a whole new roof. Yikes!!

Adrian and the cleaning crew came this morning and we certainly needed it. What a blessing they have been to me through all the 15 years they have been cleaning for me. I love them like family.

(Later) The roof does not need replacing. However, it is going to cost $3,000 to repair. With repairs, we should be able to get another 5+ years before replacement. Yay!
Posted by Florence at 4:25 PM 2 comments: 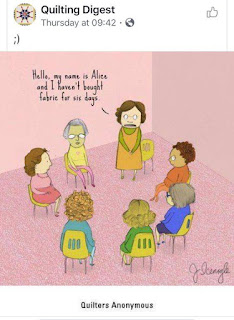 My brother in law died the night of December 23. He was 86 and died peacefully at home. Bonnie said that when she woke up this morning, he was gone. He died from a long standing heart condition. He is going to be cremated and there will be a memorial after the first of the new year.

We had a lovely celebration dinner on Christmas. DD, DSIL, and their golden doodle, Lucy, came for dinner. DD brought dessert and 2 sides JMM did the ham and rolls which left me with only the fruit salad and green beans.  It was so pleasant to walk the two dogs and then come back in and watch the kittens.

I finished My Italian Bulldozer by Alexander McCall Smith. It was rather silly and not one of his best. I much prefer his Ladies Number 1 Detective Agency series.

The lattice for my quilt top is coming along. Probably another week and I’ll be ready to sew all the strips together.  I’m not sure who I will give it to. Maybe the woman who cuts our hair.  She’s a sweetheart and we have gone to her for years.

My DD is one of the Justice Department employees who are working without being paid.  No matter what BLOTUS says, the unpaid employees are not happy about the shutdown.
Posted by Florence at 10:33 AM 2 comments: 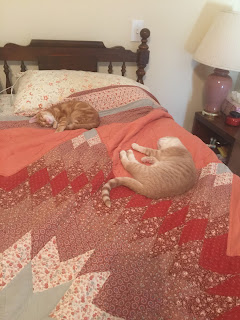 Kittens are exhausted from creating so much mayhem.

Yesterday was the winter solstice so the days will ever so slowly lengthen. I always remember the old saying that “When the days begin to lengthen, the cold begins to strengthen.” So relatively warm days like today will be few.

We went to do the grocery shopping very early this morning because I did not want to be in the shopping madness of the Saturday before Christmas. It worked out very well as there were only a few shoppers there and they were as intent on getting their shopping done and getting home before the madness prevailed as I was.

The kittens are absolutely darling. No need to buy toys for them (although I do). Just wad up a piece of paper and toss it across the floor for them and they bat it, and chase it, and steal it from each other having a blast. Long strips of fabric are also immensely entertaining. But the sweetest thing is when they are tired and climb up in my lap to sleep.

Perfect timing: The Saturday before Christmas both the dishwasher and garbage disposal are on the fritz. Maybe I can get someone out on Monday. Maybe. 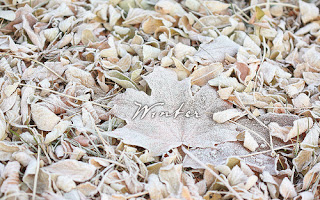 My sweet Iris is out of isolation and everyone, especially Buster, is much happier. Buster and Iris play, sleep, eat, and poop together and when separated, cry until they find each other. JMM is doing a wonderful job of getting the medication into her and applying the eye antibiotic. She is almost completely well.

We were supposed to meet P&W&C&B for lunch at Landry’s in Galveston. But Wendy called and canceled because Charles is not recovering as rapidly as we had hoped. So we will postpone until after the first of the year. So JMM and I went to the Texas Roadhouse instead. Traffic around Brazos Town Center was very congested with holiday shoppers.

Posted by Florence at 4:23 PM No comments: 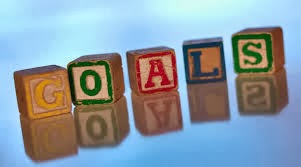 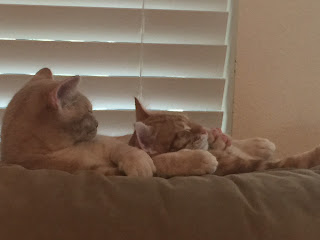 The kittens are exhausted from creating so much mayhem.

This morning I took my quilt top, backing, and binding to the quilt shop for machine quilting. I’ve already started on the next one which will be a very simple block quilt.

I finished my antibiotics for the UTI. Hope never to go through that again.

The kittens are darling and have been of some help in getting over the loss of my darling Duffy. I think what threw me was how totally unexpected his death was.  2018 was a dreadful year for the cats in my family.  First, we had to put Misty (age 13) down, then we had to put Bandit (age 15) down, and finally Duffy died so unexpectedly of an acute asthma attack. So now we have 3 cats Henry, Buster, and Iris and our dog, Angie.

Reading: The Defining Moment: FDR’s Hundred Days by Jonathan Alter. It is excellent!!

Tomorrow we are going to the New York Metropolitan Opera production of La Triviata which is being live streamed to our local AMC theatre. We saw Carmen last year this way and it is like having the best seats in the house. And during intermission, they show what is going on backstage. Amazing. 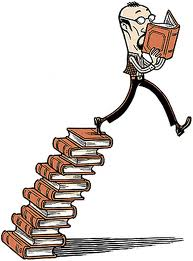 ⭐️⭐️⭐️⭐️⭐️
My Dear Hamilton: A Novel of Eliza Schuyler Hamilton by Stephanie Dray.
The Great Alone by Kristin Hannah.
To Die but Once (Maisie Dobbs #14) by Jacqueline Winspear.
A Rising Man (Sam Wyndham #1) by Abir Mukherjee.

⭐️⭐️⭐️⭐️
Truly Madly Guilty by Liane Moriarty
When We Found Home by Susan Mallery
The High Tide Club by Mary Kay Andrews
The Alice Network by Kate Quinn
The Temptation of Forgiveness by Donna Leon (Commisario Brunetti #27)
Fall from Grace by Danielle Steele (My one per year DS)
Year One by Nora Roberts
Powerless: The Year the Lights Went Out by Suzanne Goldring
Beartown by Frederick Backman
Posted by Florence at 3:35 PM 2 comments: 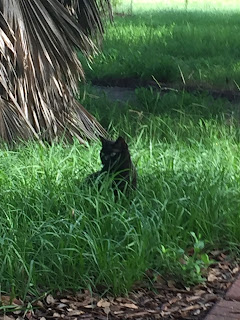 Well, December has certainly had some unpleasant surprises. First, my darling cat, Duffy, died unexpectedly of an acute asthma attack. I knew his asthma was getting worse and we had just that morning taken him to the vet and gotten his medication. But shortly after we came home from the vet, he had an acute attack and could not move air in or out of his lungs. We were with him when it happened.  I will miss his sweet head rubs for the rest of my life.

Then yesterday I suddenly developed a urinary tract infection. I was fine in the morning but by 2pm, I was in the ER with horrible bladder spasms and urine bright red with blood. It has been at least 20 years since I had a UTI and I certainly hope it is 20 more before I have another. I got an antibiotic injection, ceftriaxone, a prescription for 7 days of cephalexin, and 2 days of phenazopyridine. I am feeling much better today. People are crazy for longing for the good old days; I would have died a miserable death from this without antibiotics.

Wednesday was my 71st birthday. Let’s hope the rest of 71 is less stressful.

We have 2 new kittens from the shelter. The male, Buster, is 2 weeks older than the female, Iris. They play together and cuddle up to sleep together which is so sweet. They are both orange tabbies. I couldn’t bear to get a black kitten because I would see my sweet Duffy every time I would look at him. The new kittens are a balm to my grief.

We are in for a weekend of rainy, stormy weather.  I am glad JMM and I don’t have to be out in it but am worried about DD and DSIL who have to be out on the road this weekend.
Posted by Florence at 1:37 PM 5 comments:

Of the 53 books I read this year, these are the best:

Passionate Sage: The Character and Legacy of John Adams by Joseph Ellis.
My Dear Hamilton: A Novel of Eliza Schuyler Hamilton by Stephanie Dray.
Franklin and Winston: An Intimate Portrait of an Epic Friendship by Jon Meacham
The Newcomers: Finding Refuge, Friendship, and Hope in An American Classroom by Helen Thorpe.
Saving Tarboo Creek: One Family’s Quest to Save the Land by Scott Freeman.
Eisenhower: Soldier and Statesman by Stephen Ambrose.
Narrative of the Life of Frederick Douglass by Frederick Douglass.
The Great Alone by Kristin Hannah.
Democracy in Chains: The Deep History of the Radical Right’s Plan for America by Nancy MacLean.
A Higher Loyalty by James Comey.
To Die but Once (Maisie Dobbs #14) by Jacqueline Winspear.
The Man Who Climbs Trees by James Alfred.
A Rising Man (Sam Wyndham #1) by Abir Mukherjee.
Grant by Ron Chernow.
FDR by Jean Edward Smith.