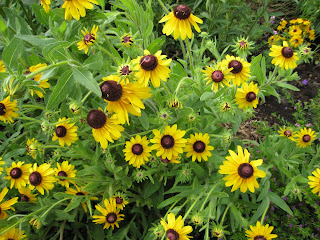 Yesterday we met DD and DSIL at Brenner’s for dinner. The food was wonderful and it is always such a pleasure to be with them.

I more or less took today off. I stayed in pajamas and took both a morning nap and an afternoon nap. I read quite a bit in FDR by Jean Edward Smith. Today I read right up to the edges of Hitler and WW II.

It is blessedly cooler and the hordes of mosquitoes are gone. I was actually able to read for a bit under the trees.

I am very unhappy that we have had almost no butterflies in our butterfly garden this year. I have no idea why the numbers have plummeted.
Posted by Florence at 4:30 PM 3 comments: 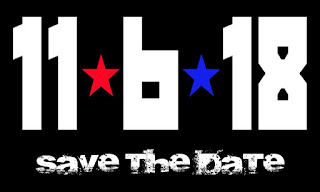 Called Senators Cornyn and Cruz:
I’m calling from to oppose Brett Kavanaugh’s Supreme Court nomination. I value equal opportunity for disabled people. Kavanaugh could undermine the federal regulations and programs, including health-care, that have advanced prospects and access for our neighbors with disabilities. America needs a fair and moderate Supreme Court judge who truly supports “equal justice under the law.” I urge you to vote against his confirmation.

Postcard to Rep. Pete Olson:
I support reauthorizing the Violence Against Women Act before Sept. 30. Since its passage in 1994, this law has increased accountability for perpetrators and received bipartisan support for three previous renewals. I want you to co-sponsor and vote for passage of H.R. 6545.Thank you.

Sent emails to Rep. Pete Olson and Senators Cornyn and Cruz:
I am concerned about the Farm Bill. The Senate version strengthened SNAP to provide critical nutrition to elders, people with disabilities, and low-income families. When it comes out of conference committee, I’m asking that youonly support a bill that maintains the Senate provisions without work requirements. I want my tax dollar to help feed hungry families.

Sent Thank You notes to Rep. Steny Hoyer (D-MD) and Rep. Michelle Lujan Grisham (D-NM:
Thank you for continuing to demand this administration comply with a court order to reunify more than 500 children and their parents. We haven’t forgotten separated families. Thank you for ensuring this administration doesn’t either.
Addresses:
SH: 6500 Cherrywood Lane, Suite 310, Greenbelt, MD 20770
MLG: 400 Gold Avenue SW, Suite 680, Albuquerque, NM 87102
Posted by Florence at 9:51 AM 1 comment: 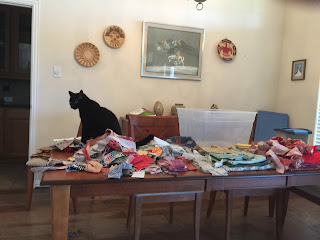 Cleaning out and organizing my fabric scraps with help from Duffy.

We really need rain. We’ve been watering trees just about every evening.  So I was happy to get a little rain yesterday and today. Not enough to do the trees any good but enough to perk up the lawn. The irony is that this time last year this whole area had been inundated by Hurricane Harvey with 40+ inches of rain. I’ll take needing to water the trees over 40+ inches of rain any time.

Our daughter came over yesterday and brought her dog Lucy. That is the happiest most eager to please dog ever. Daughter also brought a Costco Lasagna and salad for lunch. Good, minimal fuss lunch. We took the dogs out for a couple of runs and I just love to watch Lucy with her bounding lope. After lunch everyone was stuffed and so we all took a nap. We watched an episode of The Great British Baking Show which is always pleasant.  So nice to live close enough to visit.

I spent $2500 to get an electric lift chair.  My legs have weakened so much in the past six months that I really had trouble getting up from a regular chair. I’m going to have to remodel the bathrooms: 1.) the shower will need to be redone so that I can roll up to it and not have to deal with getting over the edge of the pan or deal with the door. 2.) on the small bathroom I need to take out a wall and install a pocket door so that I can get to the toilet. I am so fortunate to have the money to make these modifications.  I don’t know how I would cope without my scooter, van, and lift and now with these bathroom modifications.

The next quilt is going to be a bit different. It is more Abstract in design, blues and yellows with cream background. I cut out 660 pieces 1 1/2 inches by 3 1/2 inches, now I need to cut 36 3 1/2 by 9 1/2 inches. I have this picture in my mind now we will see how it goes together. Sometimes things turn out as planned and sometimes they seem to have a mind of their own and come out rather different.

JMM and I are reading aloud to each other London 1945: Life in the Ruins of War by Maureen Waller. It is so interesting. I had no idea how devastating the V1 and V2 rockets were in the last months of the war. The book tells how the people and the government dealt with the housing shortage caused by thousands of houses destroyed and the food shortages. Excellent so far.

I’ve got a yard sign for my Democratic Candidate for Congress, Sri Preston Kulkarni. I’m trying to get a sign for Beto but the local office is out and I’ll have to wait until next week.  I’ve never put out political signs before because I thought the HOA wouldn’t allow it. Well, it turns out that it is illegal to forbid reasonable political yard signs in Texas.

I listened to Barack Obama’s eulogy of John McCain and nearly wept with pleasure at hearing him speak in coherent sentences at a post kindergarten level. I really think the funeral was overdone but I think it was nice to focus on an honorable life rather than the vulgarity that resides in the White House today.

That’s about all the news from OakMeadows for now. 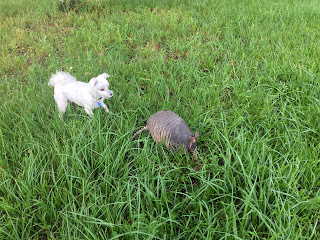 Other
Raccoons
Squirrels
Armadillo
Posted by Florence at 2:17 PM 1 comment: