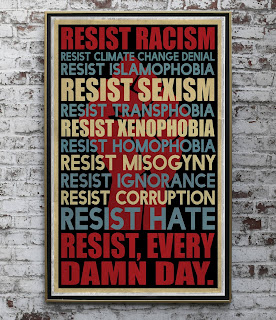 Made small donations to FairVote.org (works toward a ranked voting system for states) and Spread the Vote (helps people get the necessary documents to register to vote).

Email to Rep. Pete Olson and Senators Cornyn and Cruz:
I value voting as a cornerstone of a healthy democracy. A Pew Center report shows that a majority of both Republicans and Democrats support automatic voter registration, same-day voter registration, an election day holiday, and restoring the vote to returning citizens. To support expanding voting participation, I would like you to co-sponsor the Voter Empowerment Act of 2019 (S. 549/H.R. 1275).

Called Senators Cornyn and Cruz:
I value fair and accessible voting. Stacking districts prevents fair representation in Congress. Now that H.R. 1 has passed in the House, can I count on you to support voting fairness as it moves to the Senate? Will you urge Senate Majority Leader McConnell to bring it to the floor for a vote? Thank you.

Made a small donation to Vote.org

Wrote letters to Texas Secretary of State, State Senator Joan Huffman, and State Representative Phil Stephenson:
The outcome of the 2020 election hinges on whether U.S. voting systems are trustworthy. Hand-marked paper ballots (HMPBs) are the gold standard for election security. While some congressional leaders and for-profit voting tech companies insist that high-tech alternatives to hand-marked paper ballots are safe from hacking, they are not. Texas voters must be able to hand-mark their ballots (with accommodations for disabled people) and be able to verify their vote is counted. I look forward to hearing from you about how you plan to ensure Texas implements HMPBs well before the 2020 presidential election. Thank you.

Called Rep. Pete Olson and Senators Cornyn and Cruz:
I’m calling to encourage you to co-sponsor legislation that would give DC residents a voice in Congress. Every taxpaying citizen should have the right to elect people to represent their values. Can I count on you to support H.R. 51/S. 631?

Made a small donation to the League of Women Voters Education Fund.

Called Rep. Pete Olson and Senators Cornyn and Cruz:
I’m calling to express support for the vote-by-mail system that states like Oregon and Washington enjoy. Voting by mail gives voters time to make informed choices, reduces the expense of operating polling places, and increases security and voter participation. To expand vote by mail nationally, I would like you to cosponsor the Vote By Mail Act of 2019 (S. 26/H.R. 92).
Posted by Florence at 6:25 AM 1 comment: 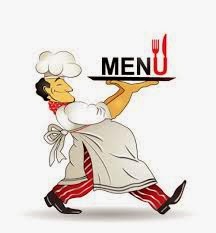 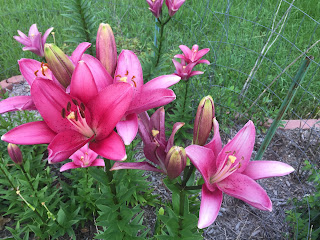 This morning JMM took Tigger in for his final adoption. He is now officially ours.

My much loved Roomba died. It had lived a long and useful life but it was time to be replaced. I decided that I wanted the Ferrari version of Roomba, the Roomba i7+. But where to buy it—online from Amazon or at the local Best Buy. I decided to call Best Buy and see if they had one in stock. So I called and it rang and rang and rang. No one ever answered. So I picked up my iPad and ordered it from Amazon, free one day delivery. This, folks, is why big box stores are going out of business.

I am almost finished with the 72 hearts needed for my next quilt — 8 more to go. I need to go to Hobby Lobby to get fabric for the lattice and white thread for the appliqué.

Hot, hot, hot. I think we set a record high for the date yesterday, 97 degrees.
Posted by Florence at 4:58 PM 1 comment: 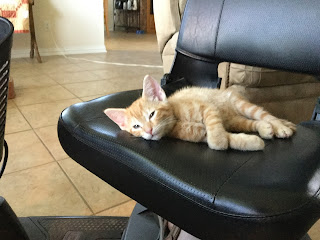 This is Tigger. He is tired and needs a nap.

We have a new kitten.  His name is Tigger and he is just a darling.  He does all the cute kitten things and is a cuddle bug.  We are thoroughly loving him.

We got back from our trip to Santa Monica a week ago. Our suitcase arrived yesterday. It’s a long story but suffice it to say we were rescued by our daughter and SIL. And finally all the laundry from the trip is washed, dried and put away.

If you are looking for something good to watch on Netflix, don’t miss Dead to Me.  And if you are into British crime, Amazon Prime has DCI Banks; it is great, if a bit gory at times.